Cells of the Immune System

The immune system is the body’s defense against infection and diseases, and consists of two major arms – the innate immune system and the adaptive immune system. Both parts are comprised of many cell types, each with its own specialty, that work together to ﬁght off disease and help maintain the body’s health. 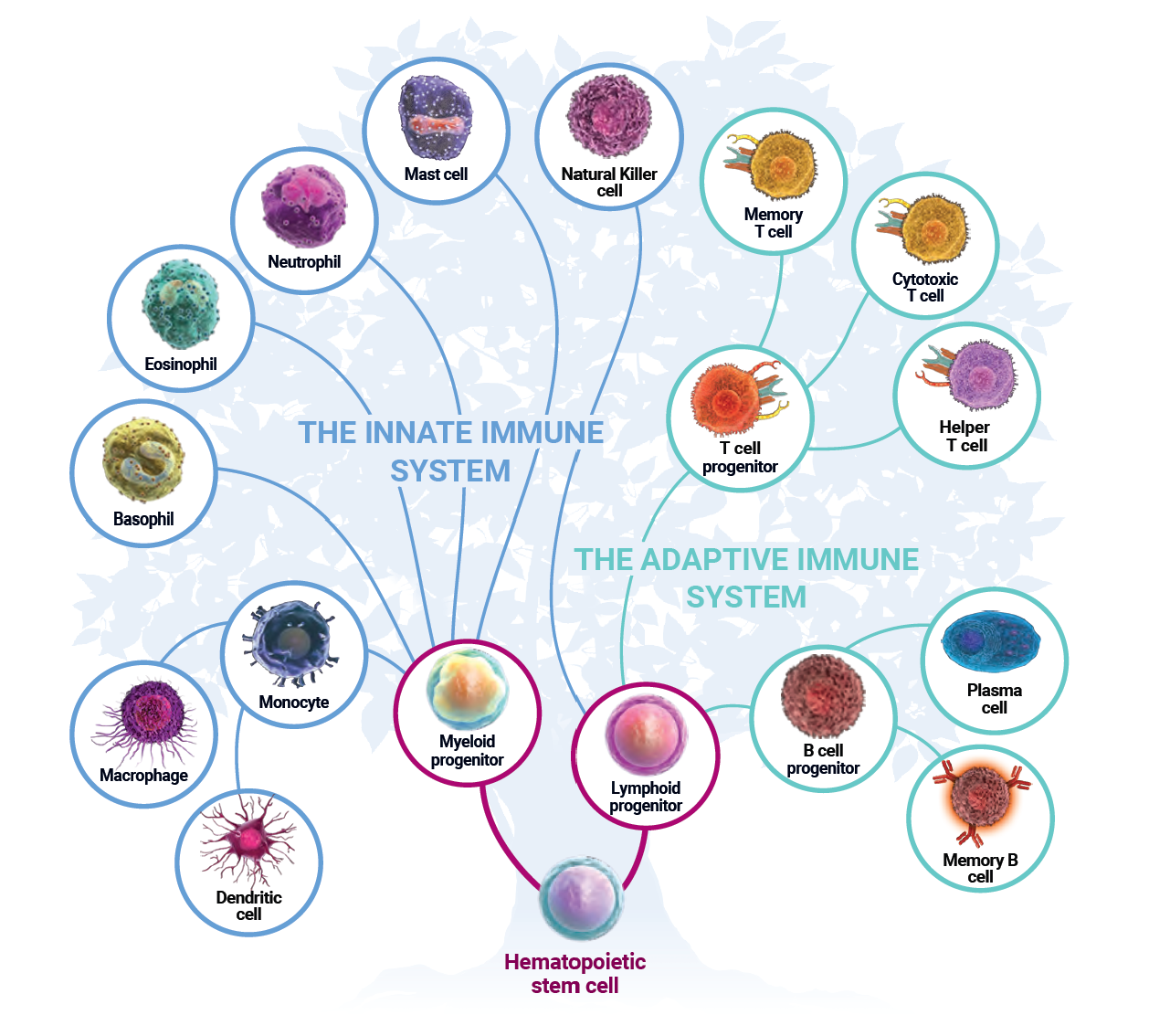 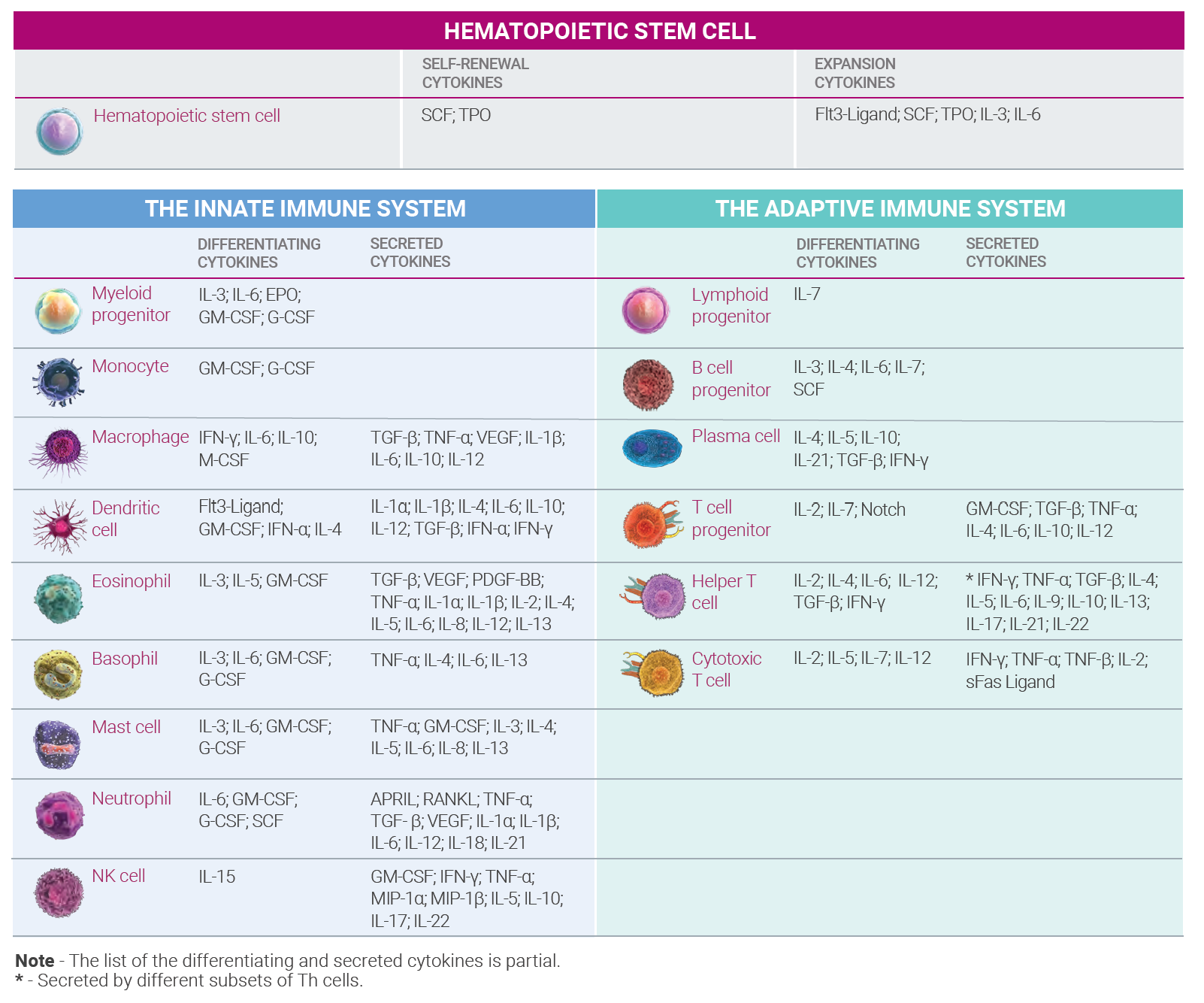 The activity of the cells of the innate system is based on pattern recognition receptors (PRRs) – special proteins that engage in detecting conserved antigens of groups of bacteria and viruses. There are two types of structures that are recognized by PRRs, pathogen-associated molecular patterns (PAMPs) that are involved in pathogen recognition, and damage-associated molecular patterns (DAMPs) that function in recognizing damaged cells. There are several families of PRRs that include:

which are major fungi receptors

Unlike PRRs, which are germline-encoded, ﬁxed and limited in number, antigen-speciﬁc T cell receptors (TCRs) and B cell immunoglobulins (Igs) of the adaptive immune system are the result of somatic gene rearrangements and can recognize practically any antigen.

Myeloid progenitors give rise to neutrophils, eosinophils, basophils (named after their staining characteristics), mast cells and monocytes, which further differentiate into dendritic cells (DCs) and macrophages.

Neutrophils, together with eosinophils and basophils, are granulocytes (cells containing granules), that belong to a family of leukocytes known as polymorphonuclear (PMN) due to their multi-lobed nuclei. Neutrophils are the most common phagocytes, being the ﬁrst to arrive at the site of tissue damage. They specialize in phagocytosis and digestion of pathogens, especially bacteria, throughout the body.

Eosinophils possess kidney-shaped, lobed nuclei that release the content of their granules in order to extracellularly digest pathogens, especially parasites, as well as secreting a variety of cytokines and growth factors that affect other cells of the immune system.

Although they are the least common granulocytes, basophils are the largest of the granulocytes exhibiting bi-lobed nuclei and histamine-rich granules. Basophils are involved in a variety of inﬂammatory reactions, including reactions associated with allergic symptoms and are an important source of IL-4, a cytokine responsible for inducing the differentiation of naïve to mature T helper (Th) cells.

Mast cells are tissue-resident granulocytes, secreting histamine and heparin, among other factors, which are involved in the defense against parasites but also in wound healing and angiogenesis.

Monocytes, the largest of the white blood cells, give rise to the two other types of professional antigen-presenting cells (APCs) a dendritic cells (DCs) and macrophages.

DCs are present mostly in tissues that are in contact with the environment outside the body, such as the skin, lungs, and intestines. Regarded as the most efﬁcient APCs, DCs’ main function is to process, present, and cross-present antigens to T and B cells. Upon activation, they are also able to secrete cytokines like IL-6, IL-10, and IL-12.

Macrophages (from Greek, “makrós” and “phagein,” meaning “big eaters”) are phagocytic scavengers that engulf and process a variety of unwanted materials that differ from healthy cells, such as cellular debris, pathogens, and cancer cells. They are tissue residents and have speciﬁc names according to their respective location. Activated macrophages are divided into two major groups, M1 and M2. M1 macrophages have pro-inﬂammatory activities, while the M2 macrophages are involved in wound healing and tissue regeneration, as well as exhibiting anti-inﬂammatory properties.

NK cells are cytotoxic cells, with small granules in their cytoplasm containing perforins and granzymes, which are used to kill their target cells. They are generated from the common lymphoid progenitor, which also produce B and T lymphocytes, but they belong to the innate immune system. NK cells destroy cancerous and infected cells by a rapid response, without the need for antigen-speciﬁc recognition and activation.

An important feature of the adaptive immune system is the ability to provide long-term memory. This feature allows for faster and more efﬁcient immune response in future encounters with a speciﬁc pathogen.

Mature B cells, when activated, differentiate into memory cells and plasma cells that secrete pathogen-speciﬁc antibodies, which play a central role in the protective immune response. B cells are one of three types of professional antigen-presenting cells (APCs). MHC class I proteins are expressed constitutively on the surfaces of all nucleated cells in the body while MHC class II proteins are typically expressed on the surfaces of certain APCs such as macrophages, B cells, and dendritic cells along with a variety of co-stimulatory molecules. MHC (Major Histocompatibilty Complex) Class II cells are involved in the activation of T cells by displaying peptide fragments of processed antigens.

Many types of T cells arise from a common T cell progenitor. Of these cells, the most commonly known are memory T cells, CD8+ cytotoxic T cells (Tc) and CD4+ Th cells. Tc cells identify and destroy cells carrying pathogen-speciﬁc antigens. Th cells, on the other hand, secrete cytokines that regulate the immune response upon being activated by antigen-presenting cells. This action is especially characteristic of the adaptive immune system, in which Th cells enhance or suppress the activity of other immune cells. The Th cells are further divided into several subsets, such as Th1, Th2, Th17 and Treg, each secreting a speciﬁc cytokine proﬁle and having a particular regulatory function of the immune response.

B plasma cells and various types of T cells are key elements of the adaptive immune system.

The adaptive immune system requires members of the innate system, such as DCs, to present antigens in order to launch and direct its responses. DCs, in particular, form a bridge between the innate and adaptive immune systems by conveying several signals which regulate and direct the adaptive immune response. The interaction between the two systems is not one-sided, as  hagocytes and other cells of the innate system recognize, through their FC receptors, antibodies bound to pathogens that enable the phagocytes and other mature cells of myeloid progeny to identify and destroy pathogens more efficiently. As a result, these activated phagocytes support T cell responses.

Cellular cross-talk plays an important role in the adaptive-immune response, such as in the case of naïve B cells that require  timulation by CD4+ Th cells in order to mount an effective response to antigens. Such cross-talk also occurs in the innate immune system when activated cells, such as neutrophils, secrete chemokines and cytokines. This activity influences the recruitment and activation of DCs.

Thus, the two arms of the immune system work together via cellular cross-talk and chemical signals in the form of cytokines and other secreted molecules in order to provide the most efficient protection for the body.